I’ve been playing Tera through Steam which is free to play and has a shop you can buy [mostly] cosmetic items from should you want to. After having played Runescape for years and become bored of the MMORPG scene I have to say Tera is nicely refreshing for the first 40 levels.

There’s a lot to learn but you don’t have to memorize information like you would with EVE or other MMOs. I downloaded it and ran the game to quickly find there was enough on-screen help to get me through. So far I’ve completed several quests, done some dungeons, and ran around fighting monsters mostly by pressing ‘F’ when near an NPC (interact key – to get quests) and carrying on clicking on monsters until either they die or I do.

Also, you can be a deranged-looking teddy bear. 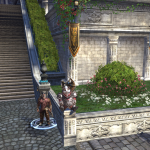 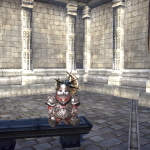 Sitting on a bench

If you have a HOTAS or other game controller connected you might have performance issues after 30 minutes. This is a bug in Tera that’s been around for years and still not fixed. You can resolve the problem by unplugging the controller before starting the game. Make sure to uninstall or disable any virtual controllers!

By the time you hit level 40 you’ve probably learned all the controls, the NPC attack patterns, and seen the same 3 monster models dozens of times with slightly changed names. It definitely gets samey and boring at that stage but as a free game you can certainly get a nice twist on combat in massively multiplayer online games.