I’ve had my Surface Pro 3 i5 256Gb model for about a month now and I still like it. It has replaced my much more powerful desktop as I can now sit much more comfortably in the living room while randomly browsing the Internet or working instead of being cooped up in the home office.

I’ve found the Surface to be extremely portable to carry about the office and very useful in meetings as I can quickly doodle a diagram to show what I mean or make a note of something easily. Before purchasing I looked around a lot to find cheaper deals or even a different tablet but couldn’t find anything. If you’re going to buy a Surface you will most likely find the cheapest option to be from Microsoft themselves. I got a bundle, including type-cover; Ethernet and Miracast adapter; case; Office subscription, cheaper than I could have bought just the Surface itself from PC World. 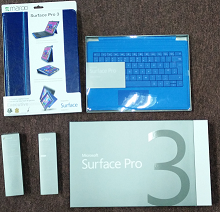 The Surface Pro 3 is definitely worth getting in my opinion but it is expensive and it does have some odd bugs/special features.

These four points should not be enough to sway you away from getting one because they are just so useful. I am now free to work creatively wherever I want, even if there’s no WiFi or electricity I can simply sit down with a full charge and tap away in Visual Studio or do a bit of drawing.

The pen is very good to use because it feels just so natural. If you’ve ever used a Biro you’ll be fine with the Surface Stylus – just don’t get the two confused. The included drawing app FreshPaint is great if, like me, you like to draw but the best thing about drawing on the Surface is that you don’t have to know anything special or be any good at all. I’m terrible at drawing and partly wanted a Surface Pro 3 to give the multi-pressure stylus a go and while it’s clearly different to pencil/paint on paper it is very nice to use. The most useful part of it all is the undo function! This is a wildly useful concept only available on an electronic device and really helps those of us who simply cannot draw but would like to try.

Other than drawing, the pen is provides a quick shortcut to OneNote by pressing the button on the top where the rubber (‘eraser’ for the rest of the world) would be on a pencil. This, again, is useful in meetings because I can switch on and get into OneNote before the person has stopped talking so I can begin taking notes straight away.

I would say that the stylus is essential to the Surface and trying to use it with touch-only feels clunky on the normal Windows interface. Simply because a human finger is fatter than the fine point of the pen it’s too easy to click the wrong option or select the wrong bit of text on the high-resolution display but the stylus solves that. Also, it easily attaches to the surface by magnetism on the charging port which is strong enough to hold the pen in place while you move about. I’ve recently used the surface to take notes while standing, holding it like I would a clipboard with my fingers on the screen with one hand and writing with the other. This worked fine in OneNote and because I did not have the type cover or case attached I was able to magnetically attach the pen to the type cover port which all felt great to use, very natural and frankly amazing to have such a powerful device in something the size of a regular clipboard.

The wireless HDMI adapter works surprisingly well with the Surface and very easily connects as a second display which can then duplicate, extend, or replace the primary. The only downside is that there seems to be about a 600ms lag (rough guess) which is long enough that action games are not really playable. I also found that some websites reject the use of a second display due to copyright issues which is absolutely stupid and severely puts me off using Blinkbox again but Netflix worked fine. The best thing about the adapter is that it is not proprietary hardware so it’ll happily work with the Surface or my Android phone. Microsoft have made a good product with this though I would not buy one at the full retail price it is well worth getting as part of a bundle.

It works. It’s a USB 3 connector gigabit Ethernet adapter and it works. There’s not a great deal other to say about it except that it, too, gets unusually warm.

It’s hard to argue that anything else is better than Microsoft Office because you’d simply be wrong. From a business perspective I’d love to find an alternative, and there are some very good ones, because Microsoft are literally insane when it comes to licensing and often it seems that those who decide how much things should cost are simply reciting a phone number they once heard. However, for a domestic user the cost isn’t too bad and if you actually do use Word/Outlook/Excel the price is easily justifiable. Personally, I like Microsoft Office but probably not enough to renew the subscription next year because there are very good alternatives that are either free or a one-off cost.

I looked at a lot of reviews before finally purchasing a Surface and they all pretty much said not to get a Pro 3 for gaming. I wanted one mainly for work anyway so wasn’t too phased but I, of course, ignored the reviews and installed Steam. The only game I’ve really tried has been Elite: Dangerous which does work but makes the fan bellow like an injured lion and I can almost hear “taking heat damage” from the Surface, not the ship, while entering a station. I’ve not tried it in combat because I’ve not figured out a control set I’m happy with on the Xbox controller yet but I can easily imagine it being unplayable. However, Supreme Commander 2 worked OK as did Civilisation 5 but what I mean by “worked fine” is that they loaded and when I got into a game it didn’t seem to lag. The touch interface for games is something that’s still a bit mind-blowing to me so I’ve not spent more than 10 minutes in either. I’ve also tried Don’t Stave which isn’t touch aware but there is a mod that adds this and, again, seems to work OK for the few minutes I played.

Being a Windows 8.1 Pro installation it comes with the option to install Hyper-V which I have done and find extremely helpful. It’s more of a toy because I can spin up a pfSense and Windows Server 2012 Eval to play with networking configurations or whatever else I like right there on the Surface. With only 8Gb memory I have to be a little more reserved about how much I allocate to each running VM but for most things I don’t need any more than four anyway and, with Linux, 768Mb memory or less is usually fine.

Get one if you want something that is easy to carry around but still powerful enough to do pretty much any professional work you want.